What would it be like to follow God? Well, why not start with this question: how does it look from here? I think that for many of us, follow the Lord means crawling into a tight, dark little space. The thing is, once we get in there we realize that it was merely a doorway to a much more spacious and even brighter reality than we had been in before.

It reminds me of Congo, the movie based on the book by Michael Crichton, where these people find this underwater tunnel that leads to an undiscovered part of the jungle where there are...well...man-eating gorillas. Ok, following God isn't like that, but we do find unexpected things once we finally work up the courage to get in there! It is kind of like what St. Therese of Lisieux says about when she saw the Alps. She offers a really stupendous description of what they look like and her whole experience and wonder in seeing them. But, she reflects, afterwards she did not want to see them again. Why? Because it only deepened her desire for Heaven.
Posted by Unknown at 4:00 AM No comments:

Here's some food for thought. St. Ignatius of Loyola, founder of the Jesuits, said that Christians should be more ready to justify than to condemn. He lets that bomb drop just like that, in about as many words. I needed about ten seconds to recover before I could read on. Hopefully I am alone in that reaction and you are wondering what I mean...

We talk about things like politics and religion, in general, with strong opinions and, many times, with little information to back ourselves up. It reminded of the movie Fair Game. Sean Penn plays a character that gets pretty hot when other people pass judgments about politics really having no idea about what is going on behind the scenes, behind the media reports. His outbursts were pretty entertaining. It was an interesting movie and based on a true story. The point is, people were pointing out "obvious" mistakes of others and basically dragging them through the mud over it. What did St. Ignatius say?

We Christians should be more ready to justify than to condemn.
Posted by Unknown at 6:00 AM No comments:

So here's a little something something from the 8th rule of St. Ignatius for the discernment of spirits...

Sometimes it feels like we are far from God, or God is far from me. I don't think that I have done anything wrong yet it feels like God has jumped ship, fled the scene, hung me out to dry. What happens? The thoughts start to come...this is going to last forever...there is no end in sight...I can't stand this- why is this happening?...I am going to watch a movie, listen to music, go...anywhere! Whatever it takes (besides prayer, of course) to feel better and get through this.

Devil alert! The enemy of my soul is present when those are the thoughts that I am thinking, repeating, believing...hook, line, and sinker. In rule 8 of his rules of discernment, St. Ignatius says that we should think positively. God does not abandon us but does allow for moments of trial. I should think that God is about to end this spell of desolation and trial. He is about to draw near once more. The previous lights and graces that I enjoyed are soon to return!

The other option is thinking negatively. Thinking that this period of spiritual darkness will last forever is what can make the time of difficulty actually unbearable. I remember a powerful seen in Lincoln when the president is speaking with his wife, Mary. She is imploring him not to let their son enter the army because she does not want to endure again that pain and suffering that she continued to carry after the loss of their first son. President Lincoln speaks strongly to her of his own suffering, of the grief that has overwhelmed him almost to the point of being unable to carry out his duties. He concludes by telling his wife that she alone will determine whether or not the agony will indeed be unendurable.

Jesus said in Matthew 6:26:
"Look at the birds of the air: they neither sow nor reap nor gather into barns, and yet your heavenly Father feeds them. Are you not of more value than they?"
Posted by Unknown at 6:00 AM 1 comment:

What's Worth Giving it All?

I love basketball. I also love Kevin Garnett. I grew up in Minnesota and KG, to this day, was the most franchise player the Timberwolves ever had. Kevin Love is making a case, but he is not there yet. I remember in one interview Garnett said that it could even be night time but as long as you have a ball, a hoop, and a light, you can keep on playing and playing. I loved that in high school. There are people out there who find something they love and give it everything they've got.

We recently saw the movie Snitch here in the seminary. There was an undercover cop in the movie played by Barry Pepper whom you may recognize from his roles in Saving Private Ryan or the new True Grit. As an undercover cop he has crazy hours- actually, he doesn't really have hours. He is another example of someone totally dedicated, like 100%, to what he is doing, so much so that he does not have a family and does not even consider the possibility since it would not mesh with his lifestyle. 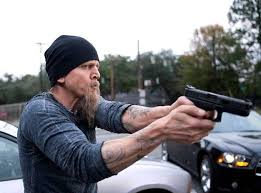 This also reminded me of Russell Crowe's character in American Gangster. He tried to live the life and have the family but, sadly, it did not work out. It got me thinking...

There are some vocations/lifestyles, like being a spouse and parent or like the examples above, which are so consuming, demanding, and fulfilling that they require giving everything. You know, I think that the priesthood fits into that category. A great example of that is Fr. Walter Ciszek, SJ (click for wikipedia). Check out his book He Leadeth Me if you want to be blown away. 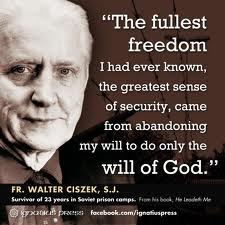 Posted by Unknown at 2:30 AM No comments:

Are you a beast of the field? No!

I am reading Bleak House by Charles Dickens. The book is worth reading for the literature itself apart from the story: "The clear cold sunshine glances into the brittle woods, and approvingly beholds the sharp wind scattering the leaves and drying the moss. It glides over the park after the moving shadows of the clouds, and chases them, and never catches them, all day. It looks in at the windows, and touches the ancestral portraits with bars and patches of brightness, never contemplated by the painters. Athwart the picture of my Lady, over the great chimney-piece, it throws a broad bend-sinister of light that strikes down crookedly into the hearth, and seems to rend it."

I am enjoying it at least. A little ways into the book a character is introduced by the last name of Chadband. He is quite entertaining. As a preacher, Chadband has a singular way of speaking replete with rhetorical questions. I will put as example a "conversation" (monologue) he has with a young man. "My young friend," says Chadband, "it is because you know nothing that you are to us a gem and a jewel. For what are you, my young friend? Are you a beast of the field? No. A bird of the air? No. A fish of the sea or river? No. You are a human boy, my young friend. A human boy. O glorious to be a human boy! And why glorious, my young friend? Because you are capable of receiving the lessons of wisdom, because you are capable of profiting by this discourse which I now deliver  for your good, because you are not a stick, or a staff, or a stock, or a stone, or a post, or a pillar..." On and on he goes...

His marveling at what it is to be human made me reflect on what it is to be a child of God by baptism. In St. Peter's basilica in Rome there is a big red circle of porphyry in the floor just inside the main door on which Charlemagne was crowned emperor of the Holy Roman Empire. It used to be more towards center of the basilica but is now in the back parallel to the baptismal font. Is there a message here? Maybe that it is of greater value to be a child of God than to have whatever earthly power. 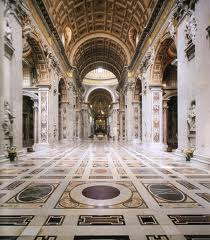