"Catch Me...": Creativity and Fun without Scruples

I recently finished reading the true story of Frank Abagnale, Jr. His book, "Catch Me if You Can," inspired the fun cat and mouse movie starring Leonardo DiCaprio and Tom Hanks. It really is a lot of fun. It was also interesting to see the differences between his account of events and what is presented in the movie. Here are a few reflections.

It is not a very long book. It's a fun, easy read and you can burn through it pretty quickly.

One thing that was very interesting to me was to see how this young man, who achieved the majority of his deceptions and frauds before he turned 20, demonstrated serious dedication to his craft. He put work in. Deceptions like the ones he pulled didn't just happen overnight nor were they spontaneous machinations he masterminded flying by the seat of his pants. He would set his sights on a task and would put in lots of preparatory work and study to make it happen. He decided to write fake checks for cash and so he read and studied and learned and improved his "craft." He decided to fake being an airline pilot to move around for free and so he studied jet planes, hung around with pilots and stewardesses to pick up the lingo, and poured through aeronautics books to achieve a good, if basic, understanding of the ins and outs of that profession. He decided to be a pediatrician and so, before setting foot in the hospital, he did the same, thorough prep work to give himself a fighting chance of actually pulling it off. He passed the bar in Louisiana and practiced law as an assistant to the attorney general for nearly a year. He spent a summer giving classes as a university professor in Utah. Not only did he pull all of this off, the people he worked with in all these places generally loved him while he was there!

His attitude was always one of overcoming challenges. When pretending to be something he was not, he was often faced with job opportunities that were lucrative and promising, if only on a temporary basis. He did not always go out looking for these new masquerades, but when they presented themselves to him he saw them as challenges, as something not easily accomplished but that would test his limits. And time after time he dove in and went for it.

He was not a cold-hearted criminal out to hurt people. His fundamental motivation was wanting to have fun and testing his limits. For that he needed money and he was very much the opportunist. He was also quite the playboy. He had many girl friends, so on that note there should be some discretion regarding the age of readers. That said, he does not go into detail about any of his escapades and the read is very clean.

The movie, of course, builds up and changes a number of things. I will avoid any spoilers on that front.

It's a book I would recommend. 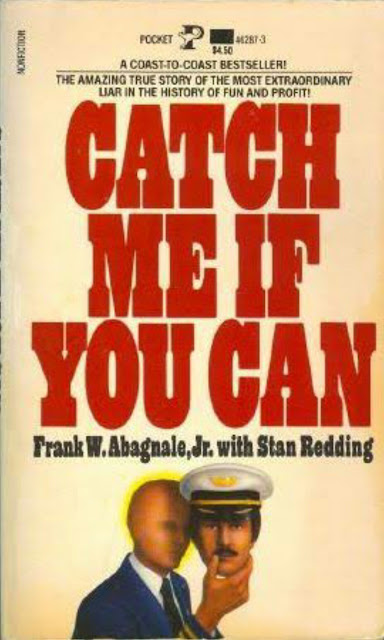 Posted by Unknown at 3:27 PM No comments: